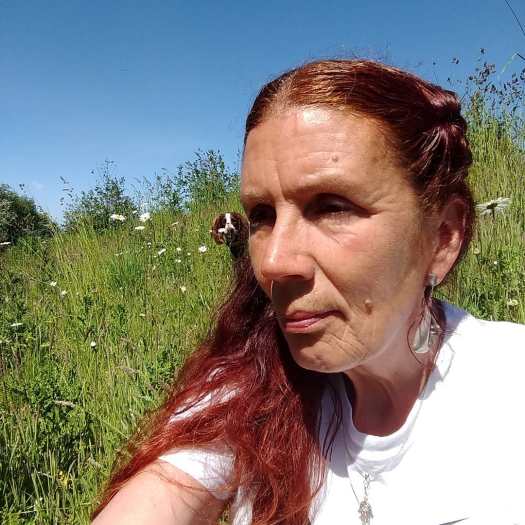 Yes, I know, I have a Springer Spaniel popping out of my ear. That’s Brockie and he’s such a part of me he thought he should be included in my author pic.

I dropped out of school aged 15, because being the consummate rebel, I hated it! After becoming a single parent I decided to return to education, graduating in 1996 with an honours degree in primary education. Ah, the irony!

As soon as I graduated I packed everything I owned into my Renault 11, including my daughter, two dogs and a cat, and headed off to Estonia to become an international school teacher. After fifteen fabulous years of  travel, teaching in Estonia, Lithuania, Ukraine, Thailand and Portugal, I returned to the UK. Here I had a serious battle with a very nasty cancer which I won, but the subsequent side-effects meant the direction of my life had to change. I turned to writing, studying at the Open University before penning my first book. My writing has been described as, “Human experience impacted upon by political situation, interwoven with a love of nature.” I’ll settle for that!

I now live on the East Coast of Scotland with Brockie the Springer and Fingal, a disgruntled Portuguese cat. My days are divided between dog-walking and working on my books. Life is good!